Yves Klein is a French plastic artist, born in Nice in 1928 and died in Paris in 1962.
He is considered one of the most important players in the post-war pictorial vanguard and a pioneer of contemporary art.

The extensive bibliography generated by Yves Klein’s work has made it possible to better understand or discover his multifaceted activity. The most eminent historians have told of his extraordinary adventure, his odyssey, his life. All marked with symbols, myths, biases, an unshakable faith in himself, with what it represents as questioning and questioning, on the part of this man convinced of his truth.

The artist’s short life was until his death and even this was a total, absolute and unreserved commitment. His faith, others will say his pride, his religion was entirely in his work, this was his life, and his life was his work.

Briefly through a few sentences, quotes and observations, it is possible to recall that the works of Yves Klein can be summarized as follows: "On one side the concept, on the other the poetics".
This freedom that he claimed to be in his life, in his art or in his means of expression, he wanted to find it, almost without limit in his work. Achieving the highest stage of freedom for men requires, in Yves Klein, the purity of color. Therefore, it became essential for him to find a “material” which would preserve the “pure color” without sacrificing its creative, aesthetic and artistic requirements. He made very numerous tests with all the coloring matters which were at that time available on the market, to finally find the pure blue pigment. This color will become his trademark, more commonly "klein blue" or "IKB".

Yves Klein is both a painter and a sculptor. He notably produced sculptures from historical icons such as The victory of Samotrace, the dying slave of Michelangelo, the Venus, etc. To paint his canvases, he used naked women who he covered with paint and who was then spread over the moving canvas.

Yves Klein is today one of the leaders of the New Realists and today his "klein blue" has marked history, thanks to its concept and its influence. 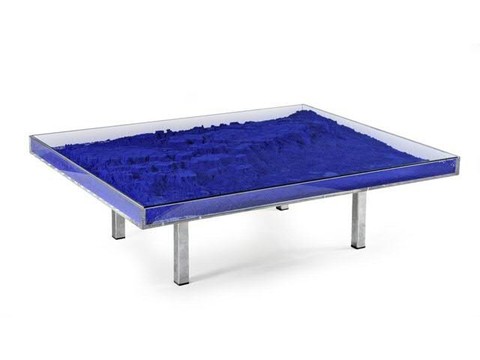 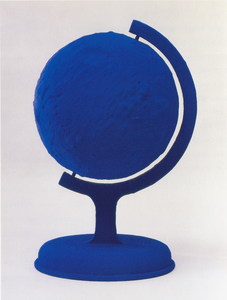